WAKE UP AND LOOK UP

Standing at a bus stop... I see a young couple come out of the convenience store with a bunch of bags and a 3 year old, who was holding his mothers hand. The man was buried in his cell phone, looking down, with a load of bags in the other hand. The woman had bags in one hand with the kid on the other side. First the young man almost gets hit, walking out onto the street, without looking, at a crosswalk. The couple freaks out at the suddenly stopped beeping car and the little boy gets upset and starts to cry...

They cross the road and stop on the sidewalk. The young woman then realizes she has to check HER phone and gives the bags to the young man to hold, so she could check her texts. The upset little boy, who is still crying, stands confused and completely ignored. The two adults juggle their items around, so the young woman can root through her purse for her phone.   The young man and woman start to argue because the man is losing patience, having to hold all the bags while he waits.

The little boy sees a dog on the other side of the street and darts into traffic........................
My heart skipped a beat as he ran toward the curb.... The street was very busy with large spurts of cars, trucks, transport trucks and buses. The spot they had chosen to stop was on a blind turn... Cars had no view of pedestrians in this spot.  There was NOTHING I could do because they were too far away to even hear my voice over the traffic... There was a dump truck gearing up in the distance, two buses coming the other way....  The kid face planted as soon as he left the curb. His mom looked up from her phone just as a car came roaring around the bend. The car saw the mother just in time to swerve around them. Traffic then stopped and quickly was backed up from the woman and man picking the kid up and freaking out. More cars were now beeping at them and each other not knowing what was going on.


The 5th car back, behind a bus, I see a man and woman in the driver and passenger seat. There are two kids in the back... THE DRIVER AND PASSENGER IN FRONT ARE ON THEIR CELL PHONES.
I wanted to walk over and smash their phones. ALL of them.
There were 2 people at that bus stop with me. One with an ipod and headphones, in his own world clicking through songs and a pregnant woman (ON HER PHONE) Who looked at me when the cars piled up and asked me what happened.


In the end NO ONE who was present actually learned a lesson! The couple blamed the cars for going too fast, the pregnant woman simply said "oh, that's neglectful." sarcastically, and went back to texting. The car behind the bus had no clue what happened and everyone went on with their lives.
We live in a world where no one pays attention anymore. Be safe people.


Don't text and drive.. or even text and walk. WAKE UP AND LOOK UP. You can actually die or kill someone.  IT'S NOT WORTH IT.
*And people wonder why I am happy without a cell phone. 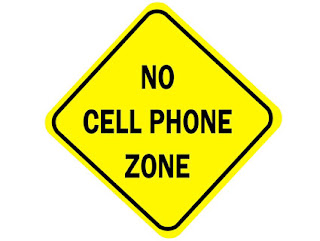 Posted by Jukebox Ninja at 8:02 pm

Get Notified by Email when New Stories are Posted